One of Africa’s most luxurious beach resorts, Swahili Beach Resort battled with beach erosion issues for years.  A consistent nominee and two time previous award winner of Kenya’s Best Beach- the Swahili Beach resort had to find a solution to replenish the sand on it’s beach and alleviate guests issues with exposed coral and rock on the beach.  After failed attempts of utilizing other historically used methods in that part of the world, they opted to install Sandsaver to solve their beach erosion issues on the Indian Ocean.

Because of limited access to the beach with heavy equipment, all of the units had to be put into place with manual labor and then filled with sand.  Because of the high tide and high surf conditions, the installation of the Sandsaver units had to be strategically timed as the tide went out allowing to work thru low tide into the night.  Just as the last units were strategically placed into position, filled with sand and strapped together, the tide has begun inching its way back towards the beach, as sunrise is just hours away.

Watch the Sandsaver beach erosion solution get installed on the beach front of the 5 star, Indian Ocean resort. See the resorts workers manually install the beach erosion barriers without the use of heavy equipment, putting the modules in place, strapping them together and filling them with sand.

The video takes us through the first 2 weeks that the Sansdaver units have been installed. Estimates at the 2 week period are that Sandsaver had accumulated approximately 3,500 cubic yards of sand around the Sandsaver modules while increasing the width profile of the beach roughly 75 feet in some areas of the beach already. Very impressive natural beach re-nourishment in just 2 short weeks!

In the video update below- it’s been 6 weeks since the Sandsaver beach erosion barrier installation on the Indian Ocean beach front. There’s been a significant amount of sand accumulation both behind and in front of the Sandsaver modules. Majority of the modules are approximately 50% covered, both in front of and behind the modules. The width profile of the beach has increased over 75′ in some areas of the beach since the Sandsaver beach erosion solution installation. Watch in the video update from the Sandsaver Beach Erosion Solution Swahili Beach Install Part 2 below to gain a recap of part 1 and the estimated accumulation 6 weeks in!

In the video it is estimated that the Sandsaver beach erosion solution had already accumulated over 20,000 cubic yards of sand at this point, while increasing the width profile of the beach over 75 feet in some areas of the beach already in just 6 short weeks since installation.

Obtaining updates during the Covid-19 pandemic of 2020 was impossible as Kenya was effected like the rest of the World, as businesses and economies shuttered to shelter in place orders. Eventually in July, the quarantine orders were slowly starting to be lifted as some businesses began reopening to limited capacity.

The amount of sand accumulation around the modules at this point is impressive. The units have accumulated large amounts of sand both in front of and behind the Sandsaver modules, continuing the increase the width profile on the beach, while contributing to the growth of the nice, gentle sloping beach. It becomes difficult to estimate the sand growth due to the jump in time since the last updates and some changes to the installation site. Visually, it is exceptionally impressive to see the sand accumulation at the Sandsaver installation location and all of the adjacent properties south of the install site seem to be experiencing sand acceretion.

In part 3 of the updated video series on the beach erosion solution installation, the video provides a brief summary for those who missed parts 1 and/or 2, showing the installation process, the sand accumulation and beach protection success at both the 2 weeks and 6 weeks marks. It then provides an extremely conservative estimate of the sand accretion and beach profile width increase in the 6 months since the Sandsaver has been installed.

Sandsavers in High Surf in the Indian Ocean

With the previous installations of the Gulf of Mexico and Lake Michigan, the Sandsaver had not been exposed to a regular high surf environment. Tides in the Great Lakes at times reached 12-14 feet, even higher during storms. Surf in the Indian Ocean installation regularly exceeds 14 and 15 feet. The increased tide energy has assisted in providing additional sand content to the systems accumulation. It is of extreme conservative estimate that the Sandsaver beach erosion solution has accumulated over 30,000 cubic yards of sand after only 6 months of being installed so far. The immediate adjacent properties next to the installation system have both experienced tremendous sand accumulation and growth, while Sandsaver has provided significant sand accumulation to numerous properties South of the installation. The system has also provided some benefit in daily seaweed clean up on the resorts beach front property. See the system installed and exposed to an extreme high surf during high tide in the video below!

Currently environmental impact studies are being conducted on the Indian Ocean installation location in effort to potentially suggest Sandsaver as a continental-wide beach erosion solution for Africa. More updates to come soon on Sandsaver’s continued progress on the Indian Ocean. 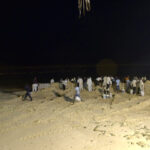 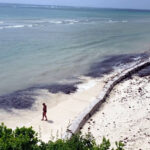 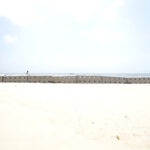 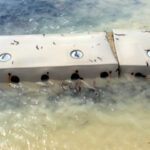 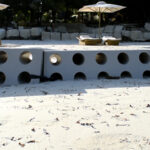 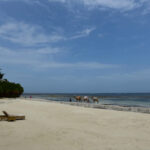 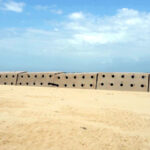 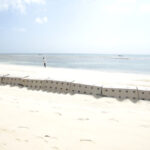 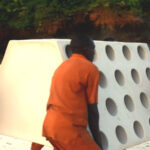 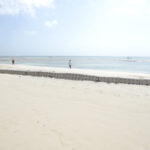 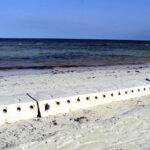 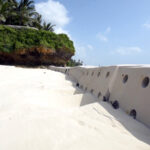 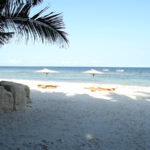 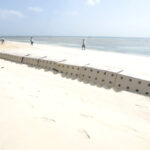 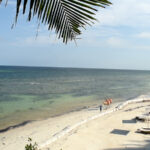 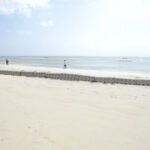 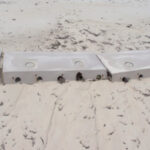 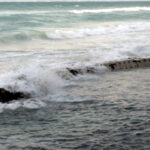 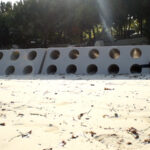 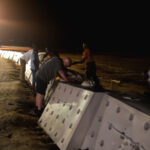 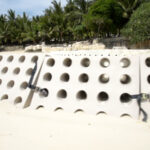 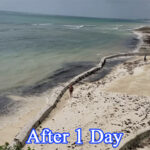 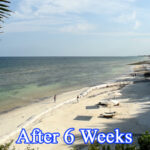 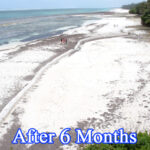