Beach erosion plagues communities all across the globe for hundreds of millions of dollars of economic loss each year.   Experts estimate that coastal erosion is responsible for around $500 million per year in coastal property loss, including damage to buildings, structures and loss of land.  Rising water levels and increased tropical storm activity have contributed to further erosion loss in many coastal communities over the recent years.

Traditionally accepted beach nourishment efforts continue to increase exponentially in costs, while myriad in controversy as some environmental activists claim that beach nourishment projects have the potential to negatively impact surrounding natural resources.  Since 1923, over 2,000 beach re-nourishment projects have been completed in the United States.  Unfortunately many beach communities are repetitively dealing with the experience of bringing in large volumes of sand, only to have it wash out in the surf thru the season or in the next series of storms.

Sandsaver provides a natural solution to beach erosion that drastically reduces the environmental impacts on the installation location in comparison to other historically accepted beach nourishment methods such as dredging or beach nourishment.  The absence of the negative environmental impacts coupled with the long term, natural solution to beach erosion continues to make Sandsaver the leading coastal erosion innovation over the last several decades.     Sandsaver is also one of the only coastal erosion & coastal protection structures that does not negatively impact adjacent properties.  It was documented in Sandsaver’s Lake Michigan installation by a 3rd party engineering firm that: “This result appears to show that, at the very least, the SandGrabber design does not generate adjacent negative impacts associated with shore normal and impermeable structures. The SG modules’ permeability and placement in a shore-parallel orientation demonstrated no negative impacts to adjacent stretches of beach. “ 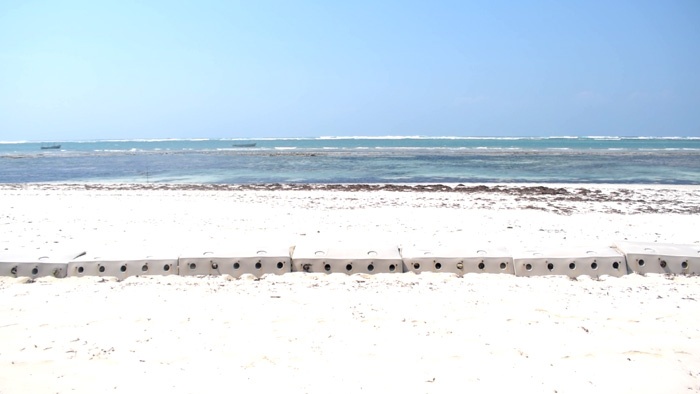 Sandsaver’s modular abilities allow for the system to be used on a temporary need be basis if so required, putting the modules in their proper installation location to protect and re-build the beach and either leave them in place to be an effective long term, natural solution to beach erosion or remove them, allowing for mother nature’s cycle to run its course and put them back into place once the beachfront property becomes eroded and needs protection or renourishment.

Based on previously proven technology called “The Sandgrabber” used all across the United States in the 1960’s and 1970’s, the Sandsaver improves upon the “Sandgrabbers” technology by encapsulating the exposed concrete inside of a rotationally molded polyethylene beach erosion barrier.  The polymer construction coupled with the rotomolding process allows for one extremely durable product that can stand up to the tests and rigors of wave and surf activity in an Ocean or Sea.

Government entities, private home owners, beach businesses and tourism industry related business owners and others that with vested interest in maintaining, beautiful pristine beaches have all pursued long term solutions to coastal erosion issues. As governmental budget shortfalls take place all across the World, more dependence on tourism revenues and growth are as important as ever. Beaches are the number 1 tourist destination that citizens of the World have always kept in common. As some government entities have experienced, as the beach front washes out to sea, the number of tourists to those particular beaches disappear as well, traveling to other beaches, resorts and hotels that are ultimately in better condition.

In August of 2019, the Sandsaver beach erosion barriers were installed for a private property owner on the Intracoastal Waterway on the Gulf of Mexico. Because of the location on the intracoastal waterway, the surf at this particular location during high tide is less than 6 inches in height. While the lack of surf at this particular location created a concern for some, yet the Sandsaver beach erosion solution is performing extremely well. After approximately 10 weeks of being installed, the modules were nearing 50% covered.

Read more about the Sandsaver beach erosion solution installation in the Gulf of Mexico here!

After fighting a beach erosion battle for a number of years, the ownership at the opulent 5 star, Swahili Beach Resort decided to take an active approach in protecting and renourishing their beach. Previously winning multiple tourism and travel industry related awards for being one of Africa’s most beautiful beaches, it was important that the resort continued to maintain its luxurious award winning beach. After trying a number of unsuccessful beach erosion solutions, the ownership elected to install Sandsaver, a modern innovation in the world of beach erosion solutions.

The Sandsaver system showed positive signs of sand accumulation within the first 12 hours of being installed. Inside of 2 weeks, the system had already accreted over 3,500 cubic yards of sand while increasing the width profile of the beach by as much as 50 feet in some areas of the beach already. After 6 weeks of being installed, the system had accumulated over 20,000 cubic yards of sand, while increasing the width of the beach as much as 75 feet in multiple areas across the length of the installation. Some local residents have even taken to social media exclaiming how beautiful the beach has become and how now they can walk across the beach in bare feet, as previously the beach was covered in exposed coral and rock that could make it painful to walk across. Now with the beach front covered in beautiful, fine sand the locals and resort guests are both ecstatic.

In April of 2011, large Sandsaver units were installed for a pilot installation in Lake Michigan to protect the beachfront property of a local church camp in Michigan. As stated in the third party engineering report, the results of the Sandsaver installation in Lake Michigan are “unambiguously positive”. It was also discovered that the Sandsaver barriers also “demonstrated no negative impacts to adjacent stretches of beach” as the adjacent properties actually showed tangible volume gains of sand.

It is stated in the report that the Sandsaver modules should have been left in place longer to witness the response to the rising Lake Michigan water levels. The pilot installation occurred during a period of historically low water levels. The increased duration of installation time would have allowed the modules to have been exposed to rising Lake Michigan water levels, which is the current situation that is plaguing many beaches and properties along the shores of all of the Great Lakes- historically high water levels. The state of Michigan permitted the installation in November of 2009, however for reasons unknown and stereotypical governmental red-tape, the US Army Corps of Engineers issued a permit at the end of November in 2010. The extra year to obtain the federal permit created a scheduling issue that forced the removal of the Sandsaver units after only 5 location surveys instead of the 7 originally requested. This in turn caused a reduction of 33% of the time that the Sandsavers were installed due to the permitting process. However, the Sandsaver still managed to produce “unambiguously positive results” in the reduced installation period, covering the modules in sand and providing a substantial beach width profile increase. The Lake Michigan Sandsaver beach erosion solution installation was the start of something special that has innovated the entire coastal erosion industry.

The Sandsaver, the most recent innovative coastal erosion solution product provides a means of a possible permanent, long term solution to beach erosion issues. Providing the ability to break down the wave’s energy and accrete sand on both sides of the modules, thus building a nice sloping beach while increasing the width profile.

Sandsaver’s modular construction allows the units to be easily installed even in locations where heavy equipment access is limited. They can also be removed and stored for future use or moved further into the surf to increase the width profile or moved up and down the beach to other locations as needed.

Learn more about the Sandsaver Beach Erosion Solution- Including how the system works, features and how it is made by clicking here.