Shore parallel sand accumulation devices have not historically proven much of long term benefit until the innovation of Sandsaver came along.  Sandsaver’s ability to break down wave energy and accumulate sand on both sides of the modules are key factors to beach re-nourishment success.  Benefiting from polyethylene’s crazy anti bio-degradation abilities and a dense ballast fill of concrete to stand up to the constant wave energy and impact, Sandsaver improves where porous materials like concrete succumb to the longer rigors of moisture and water thanks to the polymer encapsulation of the weighted materials.  Where groins, jettys and sea walls fail to provide any actual beach renourishment, the Sandsavers help by reducing the erosion caused by the relentless wave activity, as the waves crash against the rotationally molded beach erosion barrier.  The surf is forced to retreat out of the smaller end of the tapered openings, giving the sand time to settle on the beach side of the modules.  As this activity continues thru tide changes, the sand continues to accrete on both sides of the Sandsaver modules, eventually burying the modules completely in sand. 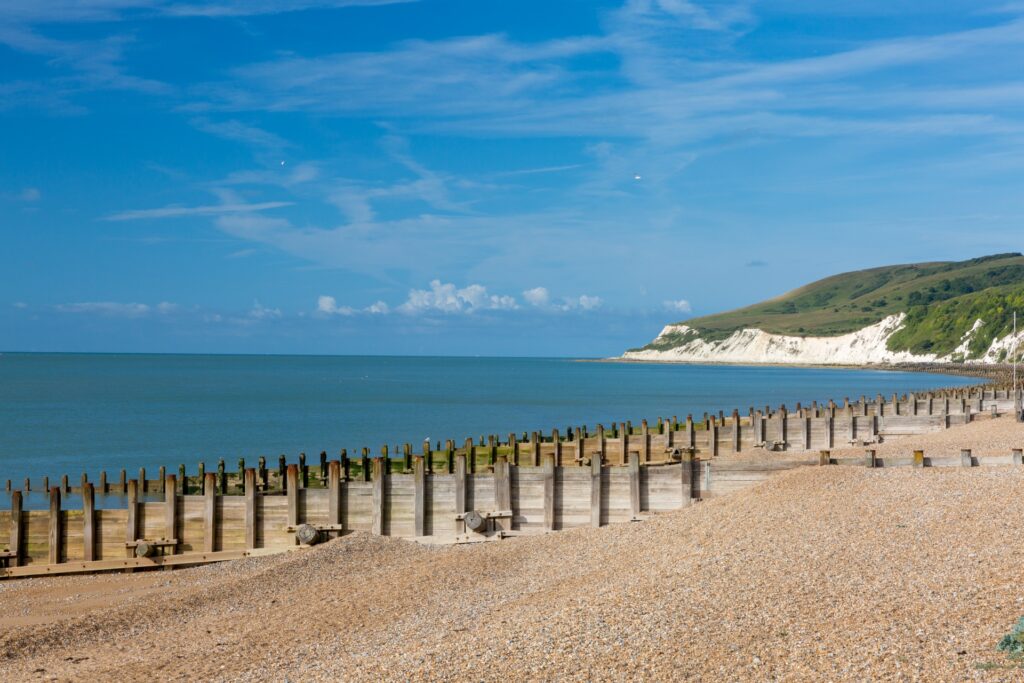 Groins down the length of a beach 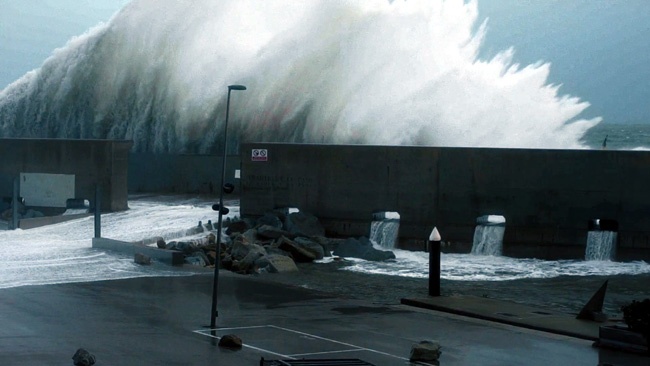 Ocean waves crashing against a Seawall

Beach re-nourishment, also known as beach dredging or beach fill is the process of removing sand and sediment from waterways or the floor of a body of water, and then either transporting it or pumping it back to the beach, accumulating sand on the beach.  This is typically in response to coastal erosion, typically threatening property, buildings or infrastructure such as roads.  In most instances, beach renourishment must be practiced regularly and cyclically as the process needs to be repeated to keep the sand on the beach plentiful as the beaches continue to erode almost as fast as they become renourished.   Unfortunately, the regularly repeated beach renourishment efforts come with increasing costs with each renourishment of sand and increasing lead times, as very few companies are capable of performing these types of operations and have tremendous backlogs of performing these services all over the globe.  Because of the 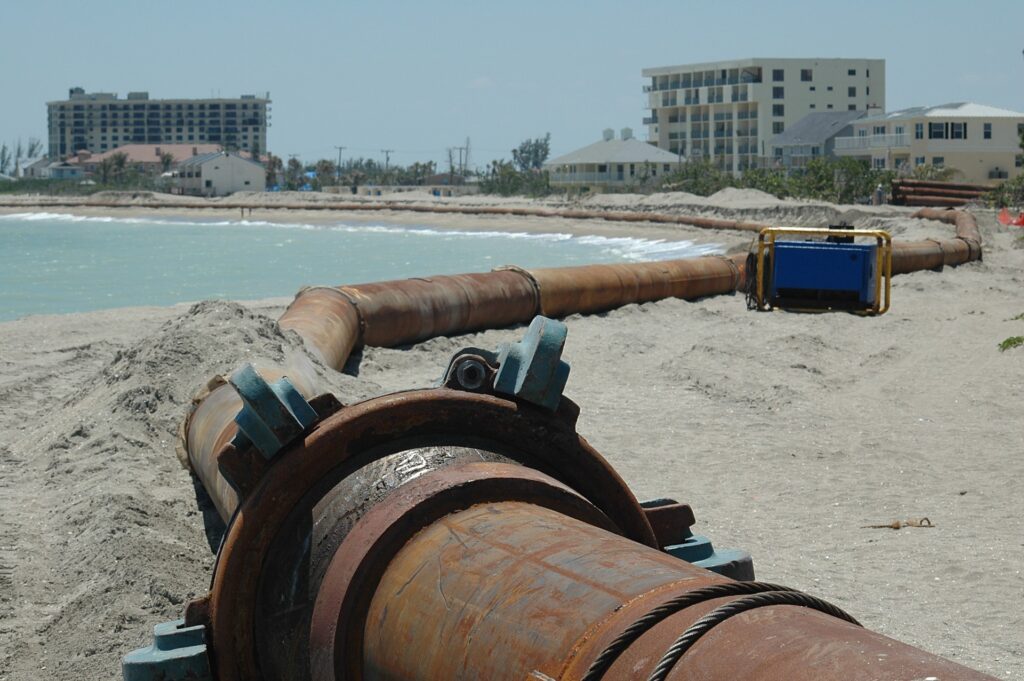 As history continues to prove that beach renourishment or beach drediging is not the long term solution that many exclaim, this opens the way to any innovative long term beach erosion solution.

The Sandsaver has now proven itself as a viable beach erosion solution, with successes in (3) major bodies of water, Gulf of Mexico, Indian Ocean and Lake Michigan. 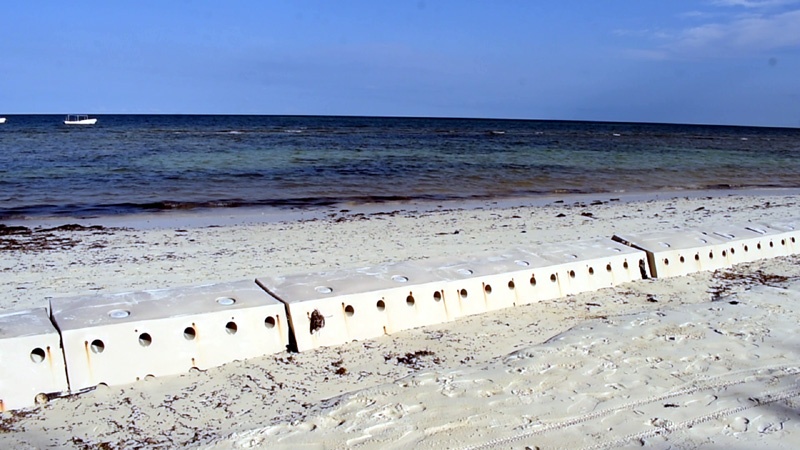 In some parts of the World, Governmental and Environmental officials have approved Sandsaver as a viable, long term beach erosion solution due to the rugged durability exhibited by the rotationally molded beach barrier and the impressively long half life that the modular polyethylene blocks feature.  The rugged durability, long half life and natural ability to re-build beach was a definitive attraction for the Sandsaver Indian Ocean beach erosion solution installation. 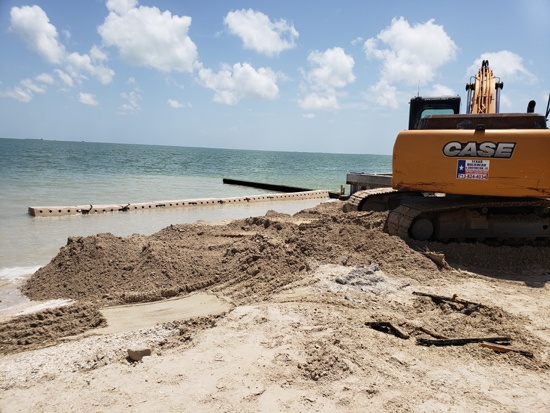 Sandsaver’s being installed in the Gulf of Mexico

Because of the reduced effectiveness of beach dredging or beach renourishment, long term coastal erosion solutions are actively being sought after all across the globe, as increasing water levels and storm activity continue to cause additional erosion to coastlines all abroad.

One property owner on the Gulf of Mexico elected to install Sandsaver as a Gulf of Mexico beach erosion solution for her property after she lost her home and beach due to Hurricanes and storm damage.  Upon being installed, the Sandsaver™ quickly went to producing results, as the modules were noticeably accumulating sand on both sides of the modules in just a matter of weeks and have already rebuilt a tremendous amount of beach. 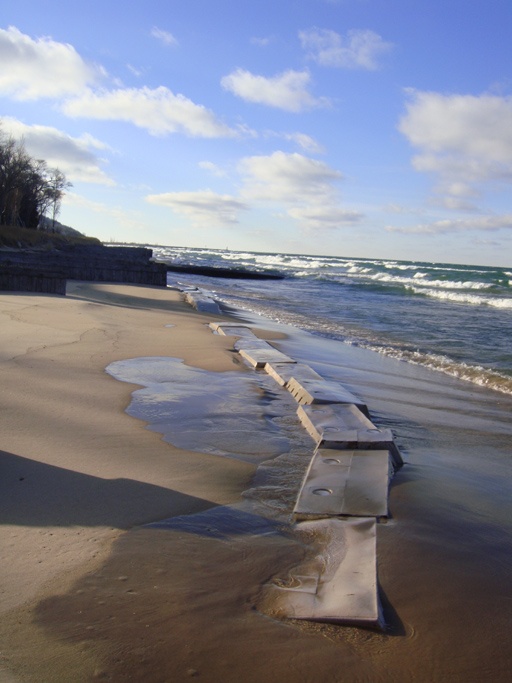 In the Sandsaver’s first installation, the beach erosion barriers were installed on Lake Michigan of the Great Lakes.  This installation was in effort to protect the coastline, buildings and structures of a church camp situated on the picturesque Great Lakes property.

According to a third party engineering firm’s final report, the Sandsaver beach erosion solution installation in Lake Michigan was “unambiguously positive” not just for the installation location but for the adjacent properties as well.